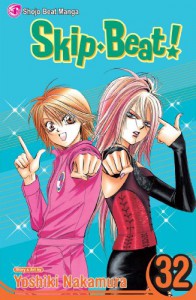 What a volume! This has to be one of the most tension-filled volumes of the series so far! So much happens in this volume in such a short time!

*WARNING: SPOILER ALERT FOR THOSE WHO HAVE NOT READ PREVIOUS VOLUMES! STOP NOW.


In this volume we get a lot of Sho once again. GAH, I hate him! Arrogant jerk! so Sho actually has the nerve to 'kidnap' Kyoko and goes off on here and questions her (big surprise right?) then he pushes her to say that she has no feelings for Ren. He then tries to use this information to get a rise out of Ren. But with Ren's mood swings it may not be the wisest of ideas....

Meanwhile Sho's questioning about Ren has Kyoko wondering what she does feel. After all volumes up until recently it must be quite the internal battle. And Kijima! What is his game? I don't think he is bad but I just don't trust him either, yet something about him reminds me of a boy with a crush.

Then there is Ren. Ren who is in such an internal dilemma. I love his character! In this volume he not only witnesses Kyoko with Sho, he gets ambushes by Sho and then gets a third rude interruption! With all this tension, I am surprised he keeps (mostly) holding things together!

This book is not as dark as the last volume but the tensions more than make up for it. And the end! How can it stop where id does?! Major cliffie! So many drastic turning points can now happen! This is one of my favorite series! I love it!

**I got this as an eBook in exchange for a fair, honest review from Viz Media via Edelweiss. All opinions expressed are strictly my own.**