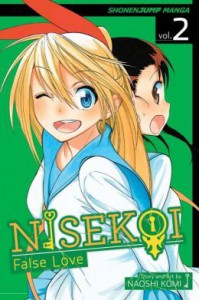 Which one is it?! This book adds more complexity as we begin to really question who Raku's promise was with. Filled with humor, hints of romance and a couple beatings we are offered this next installment to the series.

Onodera is so sweet and adorable. I love her. But her shy nature can also be a point of frustration. I wanted to shout "Just show him already!" a few times. She certainly is most likely candidate for the promise, but I don't know...

Raku is great. A nice guy, caring , down to earth or overall fun to be around. Too bad his being around often gets him in trouble with Chitoge. She sure loves to wail on him! While I like her, I hate how abusive she can be. I know much steams from her own insecurities, which we begin to see here, but still.... Be NICE, girl!

Once again, fun art, a fast-paced read that has me itching for more! Especially with the arrival on a new character...Dun, Dun, Dun!!

*I received a digital copy of this manga from Viz Media, via Edelweiss, in exchange for a fair and honest review.*
Tweet